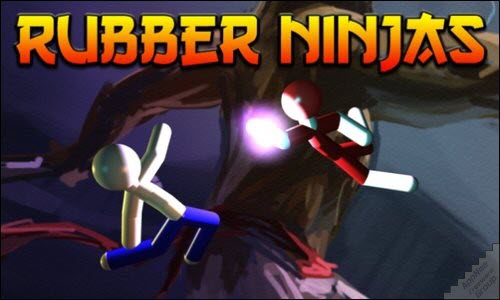 Rubber Ninjas is an innovative and unique 3D fighting game based on three-dimensional space and physical feedback, developed for Windows and Mac platforms by Matteo Guarnieri using his own ragdoll engine. It uses smooth OpenGL graphics technology, custom ragdoll physics engine and movie camera technology, and provides an immersive and exciting combat experience.

Rubber Ninjas employs a minimalist character model design but very rich body action design, which gives a high sense of hitting, enjoyment and freedom in the process of gaming. The game is easy to master, but to play well, one needs to be familiar with the control process and experience with the weightless doll. There’s a lot of freedom to play, you’ll never encounter the same or similar battle twice, the freedom of movement in the space, and the variety of characters and weapons to choose from also make the game more innovative and playable.

The game scene uses a full 360 degree of 3D space as background, the character uses an abstract rubber man, the action is free and realistic, the graphics effect in fighting is excellent, and there is a surround action slowdown effect that is similar to the slow motion in a movie, very shocking and cool. The music in game is full of rhythm, and the sound effects combine with the actions and make a good example of the effect of hitting. The background music sublimates the atmosphere of game, making this fighting game full of fantasy and a unknown feeling. In addition, more than 50 levels and a 2-player versus mode also enhance the gameplay.