RUNNING WITH RIFLES (RWR for short) is a cartoonish tactical action shooting game with top-down view. It combines the popular elements in some classic series of games, such as Battlefield, Crimsonland, Recruits, and Men Of War, in order to cater to the favor of more players. Although only a small game with simple graphics, it comes with impressive and appealing gameplay and game modes.

In this territorial battle, you are just an ordinary soldier, who should kill the enemy bravely on the battlefield in order to improve the rank. Because when you have a higher rank, some soldiers with lower ranks will voluntarily follow you to fight together. You can choose to be a mere spectator in the war following the main force, or to lead a small team to charge forward. The final purpose is, of course, retrieve all the occupied territories. Remember, your country may be ruined soon without your dedication. BTW, in this game, flexible pick and roll or finding some covers is very important for each player. 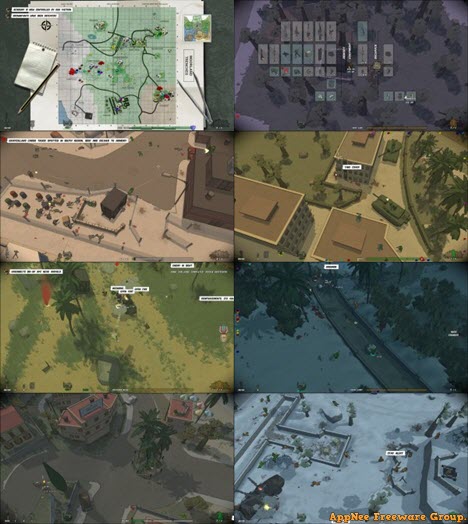 RUNNING WITH RIFLES gives a total of 9 different types of sandbox maps, each of which is very big and fragmented by three factions of warlords (Greenbelts, Graycollars, Brownpants). Every time you start a new game, the battlefield pattern is random, and different patterns can make a difference in the overall difficulty. In addition, it provides a wide range of weapons and vehicles, a good AI system, an achievement system, and a data recording system. You can play it offline with computer, connect to Internet to play with other players around the world via official servers, or direct connect with friends through IP.

Unlike most other top-down shooter games, players in RUNNING WITH RIFLES do not play a lone hero who can be 1 vs. 100, but a very common soldier. That means such circumstance often happens: you are killed by a grenade (may be even from your partner) while running. In other words, this small game at least lets you deeply feel that we are so tiny and vulnerable, as well as the cruelty of wars – you could lose your life in a battle at any time.