Unfortunately, all characteristics of Shadowsocks (SS) and ShadowsocksR (SSR) have been fully and absolutely identified and controlled by GFW (“thanks to” the forced compromise from their developers). In short, as long as the GFW wants to block your VPS, it can now do this easily and perfectly in less than 30 seconds. If you find that your SS/SSR is still working well, that means GFW has no interest or there is no need to ban you right now. Of course, each blocking cycle of GFW is about 10 weeks. Therefore, we can roughly calculate when our VPS can be unblocked.

Where there is oppression, there is resistance there; and where the oppression is greater, the resistance is stronger there. Project V is another very powerful and effective network tools set from China to help users build their own customized network system and counter GFW – it helps you build your own private network with high freedom over the Internet. Thereinto, V2Ray is its core utility – which can work alone or combine with other tools, and is responsible for network protocols and communications. To some extent, we can think of it as a homologous successor to SS/SSR. At present, it has not been killed by GFW, which is mainly because it is relatively difficult to use and does not have a large users group, thus has not become popular enough. But it is 100% certain that when V2Ray becomes easier to use and popular, it will end up exactly the same as Shadowsocks(R) does today.

Project V provides a single kernel and a variety of interface operating modes. The kernel (V2Ray) is used for the actual network interaction, routing and other processing operations for the network data, while the peripheral user interface program provides a convenient and direct operation process. V2Ray has unique advantages in terms of confusing capability, compatibility and connection speed. It supports TCP, mKCP, WebSocket and other underlying transport protocols, supports HTTP, SOCKS, Shadowsocks, VMess and other content transport protocols (HTTP only supports incoming), and comes with a complete TLS implementation. So, it can be a very powerful platform.

V2Ray is a more complex network censorship avoidance system developed on the basis of Shadowsocks, which can be simply understood as an “upgraded + enhanced edition” of Shadowsocks. But more specifically, Shadowsocks is just a simple, single-function proxy tool that is very easy to use; while V2Ray is positioned as a powerful, complex platform that is not easy to get started with, and any developer can develop, expand the functions they need based on it, or utilize modules provided by it to develop a fresh-new proxy software.

Historically, Shadowsocks was originally a program for private use developed by clowwindy, whose original intention is to allow himself to simply and efficiently bypass the local Internet blockade. He had used it for a long time before he felt it’s good enough to be shared. Unfortunately, it was abandoned due to the pressure from local government in the end. While V2Ray is different. It was born as a protest against clowwindy’s abandonment and compromise. In other words, it has been working from the start to make it easier to bypass the Internet blockages. That is to confront the GFW.

Like Shadowsocks, V2Ray is not supported by any commercial company, but entirely developed by volunteers for free and made available as open source for everyone to use. Compared with Shadowsocks, V2Ray provides a more complete protocol (using the self-developed VMess protocol), fixes some shortcomings of Shadowsocks, is harder to be detected by the GFW, and has better network performance, as well as more abundant functions (such as mKCP, dynamic port, routing function, outgoing proxy, packet camouflage, WebSocket protocol, Mux). However, V2Ray has not reached the popularity degree of Shadowsocks, and is relatively weak in terms of software support. That is, it is only popular among very few people who like to think about over the anti-GFW technologies. 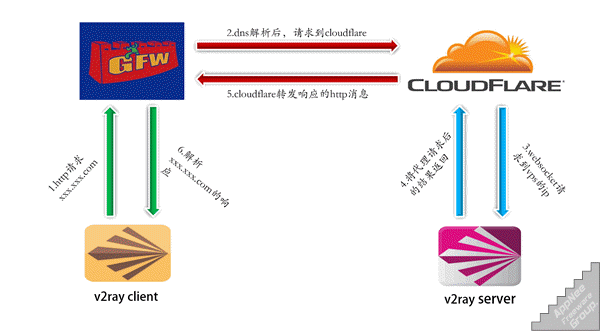