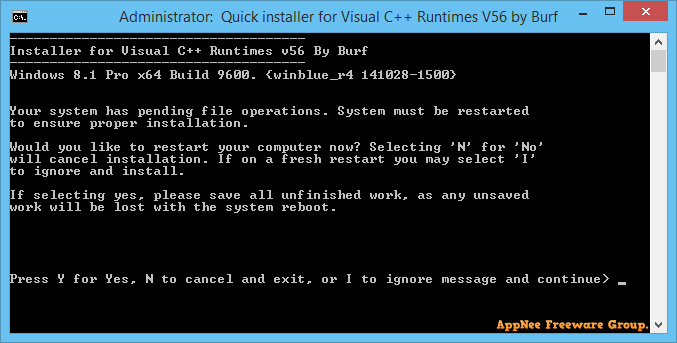 You may encounter the following error when running some software or games written using Visual Studio 20XX: Microsoft Visual C++ Runtime library Runtime Error! This proves that your system is missing the corresponding Microsoft Visual C++ Redistributable Packages as the must-have additional components (common DLL runtimes that are equivalent to the dictionary files of programs) for these programs to run properly. This is especially true for newly installed systems. This case, Visual C++ Runtime Installer can help you solve problems with one click.

Visual C++ Runtime Installer (AKA: Visual C++ Redist Installer) is a single batch script type of installer made by Burfadel from Australia. It contains all the latest versions of Microsoft Visual C++ Runtime libraries (2005, 2008, 2010, 2012, 2013 and 2017, both 32-bit and 64-bit) in a single setup. It eliminates the need of visiting Microsoft official website to download and install various versions of runtime libraries one by one. Instead, it will automatically deploy all of them in the shortest time possible in one effort.

As a must-have utility after a fresh Windows setup, Visual C++ Runtime Installer makes it possible for IT managers and technicians to quickly deploy a running environment for any Visual Studio 20XX based applications. Plus, constant updates ensure that we can always have the latest Microsoft Visual C++ Redistributable Packages installed in our all Windows versions.