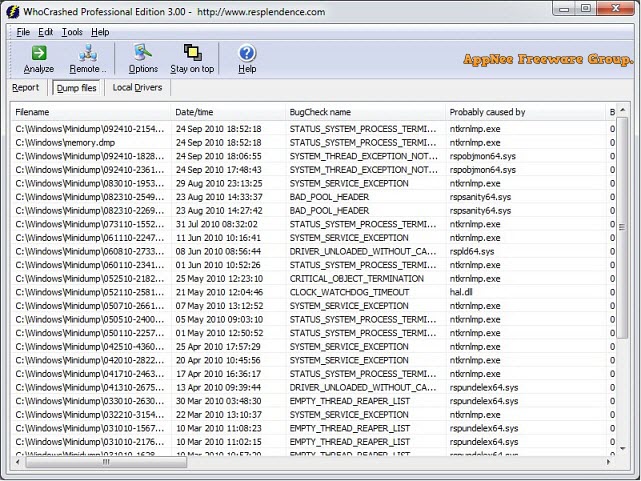 In the process of using Windows, we may have encountered such situations: the system restarts, shuts down or becomes blue screen, black screen without any warning or notice. Then you can no longer log on to the system, or get into an endless loop of blue/black screen + reboot. This case, you may first think that this is probably caused by hardware failures. However, that is almost always caused by conflicts between hardware drivers or errors of system kernel modules. The former is usually shown as a blue screen (+ restart), while the latter is usually shown as an automatic restart by default.

WhoCrashed is a very professional and practical computer faults analysis/diagnosis tool, which is more friendly, easy to use and convenient than NirSoft’s BlueScreenView. Just with one click, it accurately analyzes and determines which device, driver or kernel module has problems and might cause the system failure, and gives an easy-to-understand failure analysis report and other related information collected, which enable users to quickly and easily find the root cause of almost any kind of system failure.

WhoCrashed scans all the crash dump files on your computer and analyzes them, then tells you exactly which errors caused the system failures. Its user interface and operation are so simple that you neither need to master any system debugging techniques, nor need various system debugging tools. This way, even if you don’t have the experience of repairing a computer, you can still easily and quickly find out what is causing your computer to malfunction.