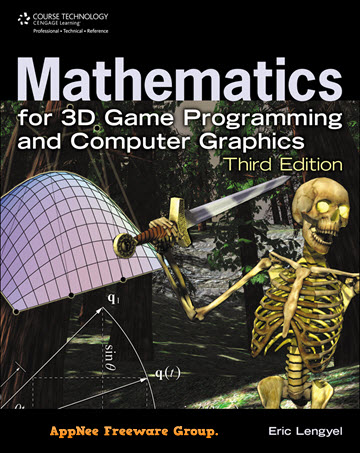 From a professional perspective, Mathematics for 3D Game Programming and Computer Graphics explains the mathematical concepts used in 3D Computer Graphics and game engine that a game developer must master. Compared to the second edition, the third edition expanded on the content, introducing the knowledge for projection, shadow, physics, cloth simulation, and numerical methods. And all chapters have been revised and the shader code has been modified according to the new specifications of the shading language.

Mathematics for 3D Game Programming and Computer Graphics covers all the mathematical knowledge required by every part of the entire rendering pipeline, which is very comprehensive and practical. It starts with fairly basic knowledge, such as vector geometry and linear algebra; then introduces deeper concepts in 3D game programming in a gradual way, such like lighting and visibility detection. In addition, this book also gives the derivation process of some important conclusions, so that readers who do not have the corresponding theoretical basis can understand the relevant content well.

Among many similar books, you will find that Mathematics for 3D Game Programming and Computer Graphics is the best of them all. It is thorough, but slightly difficult and less suitable for beginners (reading this book requires the reader to have some basic knowledge, such as trigonometry and calculus). If you really don’t understand this book, then you might as well get a quick start with some booklets like Vector Math for 3D Computer Graphics, Beginning Math and Physics for Game Programmers.

To sum up, we can see that Mathematics for 3D Game Programming and Computer Graphics is an invaluable reference material for game designers and programmers. In short, through the study to this book, game developers are able to have a deep and comprehensive understanding to the basic principles of most mathematical tools.